“We didn’t start the sexual revolution but I think we gave it a good kick in the pants!” – Christine Jorgensen

In the 1930s, a sex change surgery attempted in Berlin on a patient known as Lili Elbe failed. It was most likely the first attempt at a modern sex change surgery. The patient died after the last of the series of operations.

George William Jorgensen, born on May 30, 1926, grew up as a happy child in a large close-knit family, in a crime-ridden area of the Bronx, New York City. He was a frail, blond, introverted little boy who ran away from fistfights and rough-and-tumble games.

As a teenager, George realized that he was gender wise trapped in the wrong body due to lack of male physical development. In 1945, he graduated from Christopher Columbus High School.

Shortly afterwards he got drafted into the US Army. After his discharge from the army, he attended Mohawk College in Utica, New York, the Progressive School of Photography in New Haven, Connecticut, and the Manhattan Medical and Dental Assistant School in New York City. He also had a short stint with Pathé News.

As a young man, George experienced strong emotional attachments to two male friends, but he never expressed those feelings. A couple of homosexual experiences reinforced the feeling that he wanted to relate to men as a woman, not as another man.

Concerned over his lack of male physical development, George heard about the sex reassignment surgery. He gathered information about the procedure with the help of Dr. Joseph Angelo, the husband of a classmate at the Manhattan Medical and Dental Assistant School. He then began taking the female hormone ethinyl estradiol.

At that time Sweden was the only country performing the sex reassignment surgery. So, George intended to go to Sweden.

George’s parents were both Danish-born, they had family connections in Denmark. In 1950, during a stopover in Copenhagen to visit relatives, he met Dr. Christian Hamburger, a Danish endocrinologist and specialist in rehabilitative hormonal therapy. At that time, Dr. Hamburger was experimenting in gender therapy by testing hormones on animals. George hoped that Dr. Hamburger would provide a solution to his sex problem.

At first George was a bit nervous to reveal his intentions. But Dr. Hamburger did not think there was anything particularly strange. He diagnosed George Jorgensen as a transsexual, and he was the first physician to do so. George then wanted Dr. Hamburger to perform sex reassignment surgery on him.

Dr. Georg Sturup, a Danish psychologist, assessed George Jorgensen. He accepted the determination of George to proceed with a sex reassignment surgery. Sturup petitioned the Danish government to allow castration of George Jorgensen for the sex reassignment surgery. The Danish government accepted the petition. He received special permission from the Danish Minister of Justice to undergo a series of operations in that country.

George then stayed in Copenhagen. As a first step towards transforming George into a female, Dr. Hamburger started hormone replacement therapy.

As the hormones began to take effect, George noted the changes in his body. The first sign was an increase in size of the mammary glands. Next, hair began to grow where he had a bald patch on the temple. Eventually, the whole body changed from a male to a female shape.

Dr. Hamburger asked George to take on a female identity by dressing as a woman in public.

The hormone therapy continued for more than a year.

On September 24, 1951, surgeons at Gentofte Hospital in Copenhagen performed an orchiectomy on George.

On October 8, 1951, George Jorgensen wrote to his friends how the surgery affected him:

“As you can see by the enclosed photos, taken just before the operation, I have changed a great deal. But it is the other changes that are so much more important. Remember the shy, miserable person who left America? Well, that person is no more and, as you can see, I’m in marvellous spirits.”

In November 1952, thirteen months after the first procedure, doctors at Copenhagen University Hospital performed a penectomy. Finally, George Jorgensen transformed into a female and chose the name “Christine” in honour of Dr. Christine Hamburger.

After the procedures, Christine wrote to her parents in New York:

“Nature made a mistake which I have had corrected, and now I am your daughter.”

Her family supported Christine’s decision. She later said her mother had always known her son had been different. 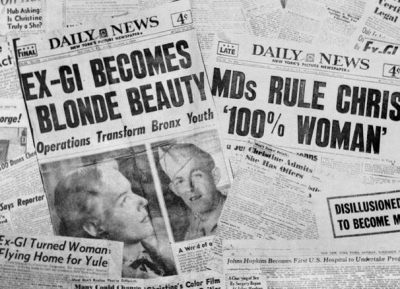 News of George Jorgensen’s sex reassignment in Denmark made news all over the world. One newspaper carried the headline: “Ex-GI becomes blonde beauty!“

The person who went abroad as ex-GI George Jorgensen returned to the United States as a broad bearing the name Christine Jorgensen. On February 12, 1953, the slender, blonde 27-year-old transsexual, wrapped in a fur coat stepped out of the plane onto the tarmac in Idlewild Airport, New York. Christine showed no vestiges of the shy man she had once been.

Christine was greeted with mixed feelings – curiosity, fascination and respect – by both the media and the public. There was relatively little hostility. Journalists tracked her for the rest of her life.

For the first time the world’s scientists and physicians were faced with a new heresy: “Sex was not immutable. Sex could be changed.”

She eventually had a vaginoplasty operation when the procedure became available in the United States. Dr. Angelo, with Harry Benjamin as a medical advisor performed the vaginoplasty.

Christine Jorgensen refused to divulge the details of her new anatomy, or how closely it resembled that of a natural born woman. “I guess they all want to take a peek,” Jorgensen once said. In interviews she touched on the subject in general terms. In 1958, she said:

“Everyone is both sexes in varying degrees. I am more of a woman than a man… Of course I can never have children, but this does not mean that I cannot have natural sexual intercourse – I am very much in the position right now of a woman who has a hysterectomy.” 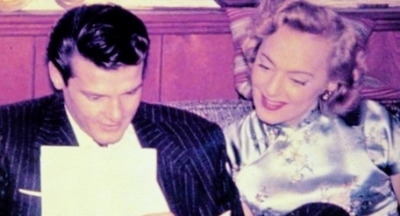 Christine had a career in Hollywood. Here she is seen with Roger Moore in 1960 (Source: bbc.com)

Hollywood embraced her. Theatre and film contracts began to roll in, she was invited to all the most glamorous parties and even crowned Woman of the Year by the Scandinavian Society in New York. Throughout the 1960s and 70s she made a comfortable living, touring the country singing and doing impressions in her own show.

Christine Jorgensen was less successful in her personal life. She never married. “I haven’t found the right fella yet,” she told ever-curious reporters.

After her vaginoplasty, Christine planned to marry John Traub, a labour union statistician, but the engagement was called off. In 1959, she announced her engagement to Howard J. Knox, a typist, in Massapequa, New York. The couple went as far as the register office. Yet, they were refused a marriage licence because Christine’s birth certificate listed her as male. In a report about the second incident, The New York Times stated that Knox had lost his job in Washington, D.C., when his engagement to Christine Jorgensen became known. 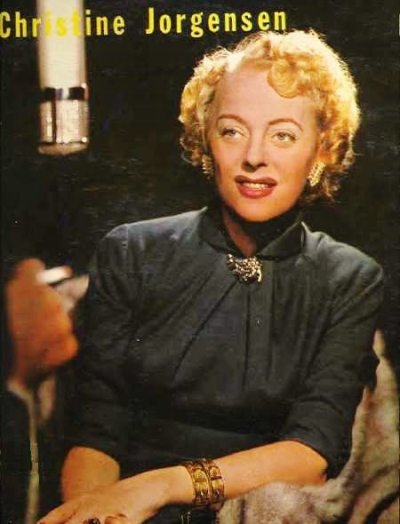 Christine Jorgensen was a very contented person, despite her apparent loneliness. She became a spokesperson for transsexual and transgender people.

A few years before her death, Christine travelled to Denmark for a reunion with the doctors who had helped her through her transformation into a woman. Speaking to the media, she acknowledged the milestone her case represented: “We didn’t start the sexual revolution, but I think we gave it a good kick in the pants!”

Christine Jorgensen died of bladder and lung cancer at the age of 62, on May 3, 1989, four weeks short of her 63rd birthday.

This site contains Adult content and is not suitable for viewers under 21 years of age.
Follow Shades of Pink on WordPress.com